After the success of our Cup to Crop Outreach event in Bukeye, we decided to hold another event in Bujumbura, the capital of Burundi. As a partner of USAID, the Burundi Agribusiness Project (BAP/PAIR), and the International Women in Coffee Alliance (IWCA) Burundi Chapter, C2C is not only invested in the development of the Coffee Sector in Burundi, but the growth of a coffee culture in Burundi. Currently there are very few roasters in Bujumbura, and even fewer that are producing quality roasted beans. Our goal with this event was to share quality NY roasted Burundian beans with those in the capital city in an effort to raise the bar on Burundian coffee consumed in-country.

We showed up to Le Cafeier , a specialty coffee shop in Bujumbura, not knowing what to expect. We were delighted to see not only a beautiful café but French presses, an espresso machine and a nice burr grinder. The manager; Moses, and head barista; Francois, are coffee people. Although the coffee shop is somewhat hidden in a new mall, it is well worth the investigation.

We broke out our Clever Coffee Driver, which has proved the best for travel, and started brewing up some clean coffee while we got to know the GEM espresso machine.  Turned out the French Presses were just shelf pieces for aesthetics, so we did a walk-through on how to brew a tasty press-pot. Thanks to the accommodating staff at Cafeier, we were able to keep brewing coffee with the same 8 press-pots until we had enough coffee for the 40 people who came. Our most eager, and first customer was the U.S Ambassador to Burundi, Pamela J. H. Slutz. With the full backing of the United States, and television crews rolling from Burundi national television, Crop to Cup President Taylor Mork addressed the issues facing Burundian farmers today and the steps C2C is taking to help. Former Prime Minister of Burundi, Coffee  Guru, current President of Intercafe (The Coffee Interprofessional Association of Burundi) and C2C brother in arms, Adrien Sibomana spoke to the efforts of BAP, Sogestal, and the Burundian coffee movement at large.

The response? “Where can I get coffee like this in Bujumbura?” seemed to be the most common response to the tasting. Our goal was to have roasters taste what the beans can achieve when roasted and brewed properly. Thanks to Intercafe’s local coffee promotion and upcoming barista training/roasting programs, Bujumbura coffee is well on its way. Thanks to all who helped make the event possible. 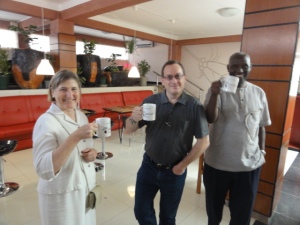 6 responses to “Crop to Cup “On the Air” in Burundi”

A farmer direct importer and wholesaler, Crop to Cup Coffee Co. works to connect coffee farmers with coffee lovers. By focusing on the traceability of coffee and the empowerment of small farmers and consumers, Crop to Cup supplies coffee beans that taste and feel good.